New York City has some of the most unique and colorful spots in its eclectic nightlife culture.

This is no truer than with the NYC gay bar scene, which attracts locals, soon-to-be honorary New Yorkers and tourists alike. 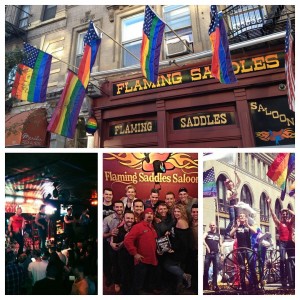 Who says New York doesn’t know how to get a little country? Step into the knee-slappin’ Flaming Saddles and find out! A posh, Southern décor highlights a high-tech jukebox so that patrons can choose the tunes they drink to, which is usually playing the likes of Reba, Dolly Parton or Brad Paisley.

The cowboy boots that the strapping bartenders wear aren’t just for show, as they sporadically jump up on the wooden bar and do a choreographed number to a beloved country song. One of their favorites? “Wild, Wild West.”